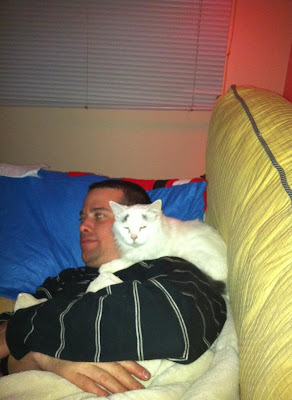 Peter PDP, our favorite Radio DJ and amazing volunteer is currently fostering one of our cats, Juice. He's sharing this adorable (and hilarious!) story about our shelter and Juice.

" Ok gear down big rig and have a seat on Petey's knee and I will tell you the tale of how parade float the cat came to be.

In Brooks Alberta the animal shelter is named BAPS (Brooks animal protection super secret service BAPSSS) and I love animals so I have raised money on air for them a few months back.

After stopping by on the regular to drop off donations I would always visit with the dogs and cats. I'm an asshole in real life but a big suck when it comes to animals and care more for them them most people.

Poor 8 year old Juice had been there for 9 months, she was found on the highway outside medicine hat abandon. With over 75 other cute kittens and agile cats with breathe that would not wilt flowers she was not the pick of the litter if you will. I felt bad and went to say hi, she immediately crawled on me and dragged her big belly on my lap. I pet her, she purred, we bonded.

I had to show Kerri Juice the next day as it truly pulled on my heart strings. When we came into the cat room she did the same routine with Kerri and we decided to foster her for a few months. We brought our own cat carrier but that was far to small to hold such a large puddle of cat and a dog carrier was supplemented.

After bringing home the matted ball of fur BAPSSS being the amazing most caring place ever arranged a grooming for free to de-smell the large creature. After that was taken care of and she was shaved and looked like a fat bald lion she hid for a week or two under beds and tables that fit her girth. I spent many nights on the floor talking with her and meowing back and forth I even downloaded an APP on my iphone that was supposed to translate my words to cat meows. I think it just scared her.

After a few weeks she would come meet me at the top of the stairs and follow me around. Even when I shower she will reach under the door in a last ditch effort to be near me ( i will host the pic) As time has passed, she became more and more attached and as have I. I even look forward to her horrendous breathe on my face while she snuggles and tries to clean my hair. I could do without the constant eye cleanings but meh goes with the territory.

She was named by Marcus my old news guy who when he first saw her he blurted " HOLLY HELL THAT THING IS A PARADE FLOAT" We have short formed it to just PF now.

This is the story of Juice aka PF, my pal, my gal, My ugly little cock eyed ball of fur that makes my other animals jealous!" Thanks, Pete. You brighten all of our days.
Posted by Brooks Animal Protection Society at 1:10 PM