Here's a little update on Lloyd, now named Argyle! He's now a BIG boy who's growing fast. He was a volunteer favorite who was adopted at the start of this month.

"This is the new member of the Ryan family!!! He has settled in great and is enjoying his new home. He loves to play ball and makes you chase him. When we go for long walks in the fields he loves to run in the long grass. He is also responding to training really well and is becoming bigger every day.

Thanks again for all your help!!!"
Posted by Brooks Animal Protection Society at 2:10 PM No comments: 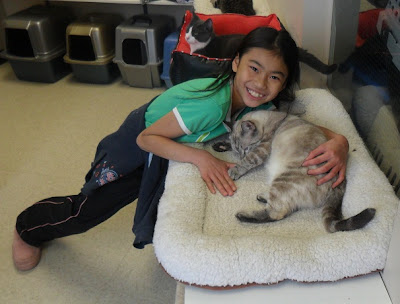 BAPS is having a Volunteer Orientation tomorrow ((Nov. 27) at 2:00pm and December 4 at 2:00pm. If you are interested in volunteering please come down and see what it's about! Children under 14 must be accompanied by a parent or guardian.
Posted by Brooks Animal Protection Society at 1:49 PM No comments: 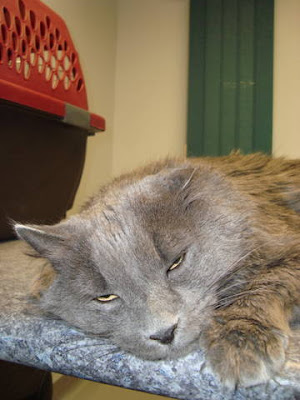 Are you missing this large, male cat or know anyone who might be? Please contact BAPS at 403-362-4323
Posted by Brooks Animal Protection Society at 10:15 AM No comments: 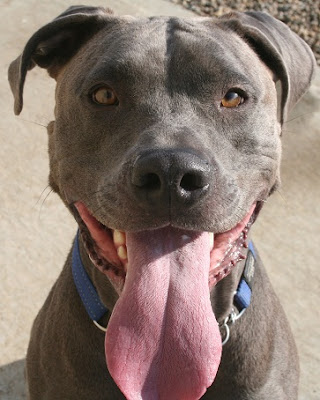 Hey guys, guess what... Tyler was just adopted. He's going to have a bright future and career as a Fire Investigation Dog Detective. He of course has months of training ahead of him but he's a lucky guy!
Posted by Brooks Animal Protection Society at 3:43 PM No comments: 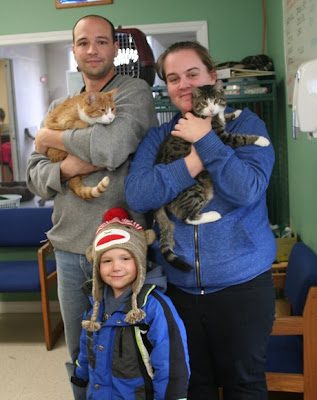 Did you know less than 2% of our cats are claimed by their owners? Well, imagine how surprised we were today when two of them went home!
Posted by Brooks Animal Protection Society at 11:04 AM No comments:

Jess was a little collie puppy brought in to us in October of 2010, when she was found all alone in a vacant field with no one around. She was about 2 months old. She was quickly adopted and here is an update!

This is the Wilson family checking in about year after we adopted Kida (formerly known as Jess) from your facility. We just wanted to tell you a little bit about how she's doing and how much we've come to love her as part of our family.

Despite some early timidness Kida has turned into a brave little explorer ready to tackle mysteries head on and give the run around to dogs eight times her size. And we do mean run around, she may just be the quickest dog in all of Edmonton, we've even been thinking of doing some agility training with her, she's a clever little girl and we're sure she'd pick up on it amazingly fast. Recently while walking Kida down in the off leash area near out home we met another dog with the same coloring and build and discovered that this dog was a Border Collie cross with a Jack Russel terrier. Guess we figured out why she has a never ending reservoir of energy! She gets a long great with her older sister even though sometimes she likes to tease her by stealing Ariel's toys and having her give chase. Having other dogs chase her might be her most favorite thing in the world. Well, besides: Her fuzzy squeaky toys, Roll-Over dog treats, hiding her tennis balls in blankets, "overseeing" the outside world from her perch atop the couch, going for at least 3 walks a day, stealing the blankets bedtime and of course sleeping like a weirdo (see pictures for evidence)

We want to thank you for introducing us to this wonderful, happy, cuddly and active little girl because she has now become an important part of our family and we couldn't imagine life with out her. 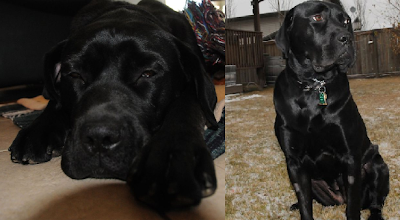 A Story from Opal, a Mastiff recently adopted from us!

Hey, Girls, Bubbles here! Just to let you guys know I am doing fabulously. I had my tooth surgery yesterday - it definitely was shattered and had to come out in many pieces, but they packed my gum with stuff and sewed me up so I get soft stuff for a few weeks! It hasn't slowed me down much though and soon I will be feeling 300% better! I have put on 6+ pounds and the vet says I am just perfect now. Mom has me in obedience class - with other doggies and of course, I am the class clown! I can't go by the mirrors without admiring how beautiful I am and when they try to do this 'recall' thing, I put the leash in my mouth and walk myself, eventually, over to Mom! I am learning sit, stay, down, come (when I feel like it) and am walking really well on a leash! Mom has me coming back to her, sometimes, with the squeaky ball but mostly l just love my tummy rubbed and I lay right beside Mom and she rubs it for hours! Dad rubs my head and kisses me lots and I really like that! Oh, and I almost get into the Jeep by myself (ok, I put my front paws up and Mom lifts my bottom in) by I am loving getting out and meeting peoples. The kids in the 'hood line up for the bus in the morning and on our morning walk Mom lets me stop and kiss them all and they all know my name. They all giggle! Kids are sticky and always have tasty stuff on their faces! All in all, life is great and I just love my new home - even if I do have to go into that cagey thing when Mom goes to work. I go in all by myself now but I still give Mom that guilt look though, just for good measure.

Mom and Dad have about 100 pix of me but Dad only sent the three you will see on the next email! Thanks for everything, ladies - you saved me for 2 people who love me more than you know! Have a great Christmas, Mom says I am the best present of all!!